Today, barcodes are used in a wide range of industries. They are one of the fundamental, well-known components of packaging. Even those with little information will form certain shapes in their imaginations when the barcode is discussed. Let’s look at the definition of a barcode first before discussing the barcode types and their history.

All across the world, barcodes are utilized as a form of product identification. Essentially, the data is displayed using various coding schemes in order for visually proficient machines to read it. The barcode, which allows access to product information in databases, is a unique code for each product. Although one-dimensional linear shapes are the most typical, there are now more types of barcodes than ever before. Barcode types were used for a long period after they initially debuted, with data contained between lines and gaps. This kind of application is still the most typical for barcodes.

Barcodes used for data collection can include inventory and price information. They can also be used to track the goods and ensure that their movements are monitored throughout the supply chain. Of course, not every form of barcode can fulfill each of these requirements. Due to this, different barcode types are typically grouped together based on common traits. 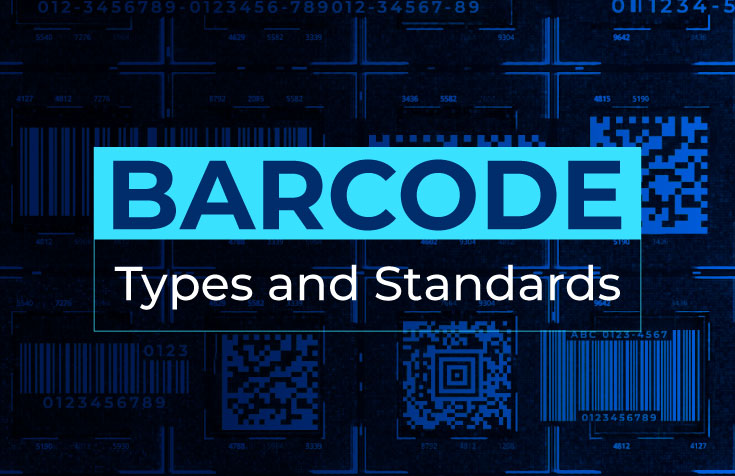 In the 1940s, the owner of a grocery chain in the United States demanded that merchandise be automatically registered at the checkout. Graduate students Bernard Silver and Norman Woodland began working on this request after learning that the Drexel Institute of Technology, to which he had applied, was not interested in the topic. Even if they succeeded, it would have been tremendously expensive.

They prepared a circular design, but later this design would also change. Deepening the research, Norman designed a label that would work with Morse code logic and be read by browsers. Instead of dots and hyphens in Morse code; thin, thick lines and spaces between them were to be used. In 1949, they prepared prototypes and received a patent. In 1962, Philco bought the patent and then sold it to RCA.

Barcode Types According to Their Features and Usage Areas

Barcode types are divided into two main groups 1D (one-dimensional) and 2D, (two-dimensional) in terms of the prevalence of use. 2D codes have more data capacity and are very difficult to emulate. However, unlike 1D codes, 2D codes can read the data even if there is wear or damage. Although the use of barcodes is preferred according to the requirements and production operations, the global barcode standards setter is the GS1 organization.

One-dimensional barcodes are one of the most commonly used barcode types. 1D barcodes use a series of variable-width lines and spaces to encode data, including the GTIN for product identification. However it can only hold a very limited amount of data encoded by lines of varying widths and the spaces between them, hence they are also called linear barcodes.

In practically every market and grocery shop in the world, one-dimensional barcodes are used to identify consumer goods. They are utilized during the sales process and for inventory control. It comprises some of the most conventional or well-known 1D barcode types, including the UPC, EAN, and 128 barcode types.

The UPC (Universal Product Code) barcode is one of the most widely used barcodes in the world. A UPC is a 12-digit barcode used in U.S and Canada to label consumer products and outer packaging with an item number which are helping to identify information such as brand, size, color, and value. Along with the UPC, the EAN (European Article Numbering) barcode has 2 barcode types. First EAN-13 which is 13-digit, is mainly used to mark consumer products that pass the checkout point and which are identified with a GTIN-13 or a variable weight code. EAN-8 is generally used to label small products that have limited space for coding. Code128 is a data carrier created, so it enables items to be tracked through the global supply chain.

Among the barcode types, they have recently begun to be used. 2D barcodes are also divided into varieties according to their usage area and purpose. They have a higher data capacity than 1D barcodes, and 2D codes are impossible to misread thanks to the self-checking mechanism.

The use of 2D codes has become widespread due to the development of production technologies as well as external factors such as the COVID-19 pandemic. 2D barcodes look like squares or rectangles that contain many small, individual dots. 2D barcodes store big information on both the horizontal and vertical planes and also can remain readable even when printed in a small size or hatched into a product. Furthermore, 2D codes are safer because the information stored in the code can be easily encrypted. 2D barcode types are QR Code, Datamatrix, Aztec Code, and PDF417. However, the most preferred ones are datamatrix and QR Codes.

Aztec Code got its name because of the similarity of its design to the Aztec pyramids. Common usage areas are transportation, commercial and automotive industries. 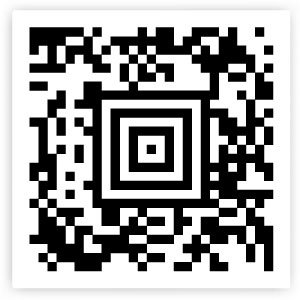 The PDF417 is mainly used in the U.S. and Europe. 2D barcode symbols are primarily used in logistics applications (automotive industry), transportation systems (tickets, shipping labels), and identification (driver’s licenses, passports, etc.). The PDF417 code consists of a start pattern on the left and an end pattern on the right, and the data is encoded in the central section.

Data matrix codes are usually square or can be rectangular. It is consisting of black (on) and white (off) cells that comprise the eponymous matrix. The dark, L-shaped border defines the code’s orientation, while the alternating patterns on the opposite sides enumerate the rows and columns, and can contain data up to 2335 alphanumeric characters. Furthermore, data matrix codes can be scanned from any angle (0-360°) and it is the only 2D code approved by the GS1 organization for healthcare products. In fact, in Russia, Chestny Znak uses a special code called crypto, which is made up of four data matrix combinations.

Datamatrix is widely used in the field of traceability, especially in the traceability of pharmaceuticals. Pharmaceutical traceability started for the first time in the Republic of Turkey in 2009. VISIOTT, a global company based in Ankara, also stands out with its experience in this field.

The reasons why datamatrix code is preferred among the barcode types in pharmaceutical traceability are that it is very difficult to imitate, easy to apply, and can store data with a very large capacity in a very small space. Datamatrix, whose capacity is shaped according to their size, that is, the number of rows and columns. 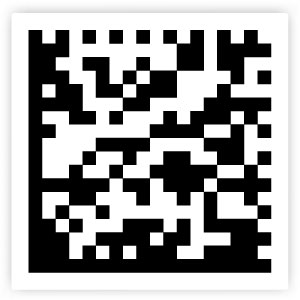 The QR code, invented by Denso in 1994, can be read from any angle. It is formed by cellular divisions of light and dark colors. QR codes, which can be read by many phones today, have become widespread, especially during the pandemic period. It has started to be used frequently in restaurant menus, health applications, and public transportation, thus contributing to sustainability.

QR codes with identical squares on three corners and consist of black squares arranged in a grid on a white background. as finder patterns can store a maximum of 4296 alphanumeric characters.

These codes can contain more information than traditional barcodes and mainly handle four data modes; alphanumerical, numeric, binary, and Kanji. Datamatrix and QR codes, which are quite similar, can be used in the same fields in some cases but they cannot be equivalent to each other.

In other words, it is more effective to choose one according to criteria such as the purpose of use, and the place where it will be used. In addition to that, the laws put forward by the authorities can also be decisive in the use of barcode types. 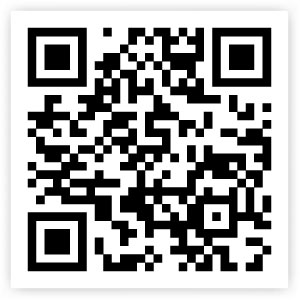 QR code and data matrix are the two most preferred barcode types in traceability operations. Data Matrix codes are physically smaller than QR codes, and offer high data density in a very small size, making them an ideal solution for marking individual product parts, where space might be limited. In addition to that, the datamatrix is the only 2D code approved by GS1 for healthcare products. On the other hand, QR codes are physically larger than data matrix codes and have more data capacity.

The finder pattern of the datamatrix is L-shaped, while that of the QR code is the squares located in the three corners. There are certain standards for the principles of operation and creation of both codes. ISO/IEC 16022 standards for datamatrix codes and ISO/IEC 18004 standards for QR codes can be examined.

To maintain a competitive advantage and make sure they follow market trends, businesses should regularly update and upgrade their technology products. One of the most essential tools companies may use to assure their success is 2D code. Therefore, there will be advantages to using the barcode types that are most suitable for you and your business.

Which Barcode Types to Choose

You can determine which barcode types to use for your business with the help of the answers to these questions.

Technologies for 2D Code Applications that are Efficient and Economical

VISIOTT is a pioneer in coding and especially 2D code applications; It produces 2D coding technologies for vials, aseptic, bottles, cartons, and much more product packaging. With the experience it has amassed thus far, VISIOTT is unique as a pioneer in 2D coding technology. VISIOTT, which develops all configurable technologies based on the objective and client expectations, is also preferred for providing cost-effective solutions. VISIOTT is always by its customers’ side, with conveniently accessible spare parts, offices in many areas of the world, and a 24/7 support service. To learn more about our services and the barcode types, get in touch with us. 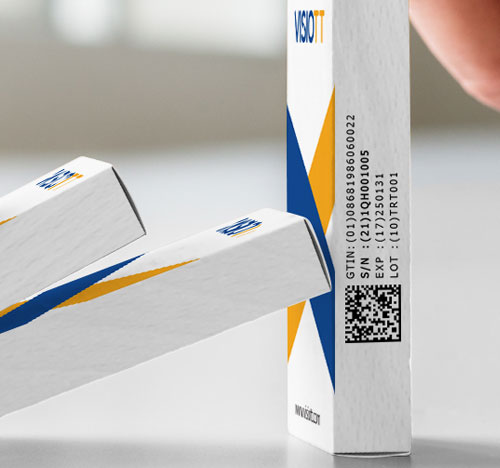 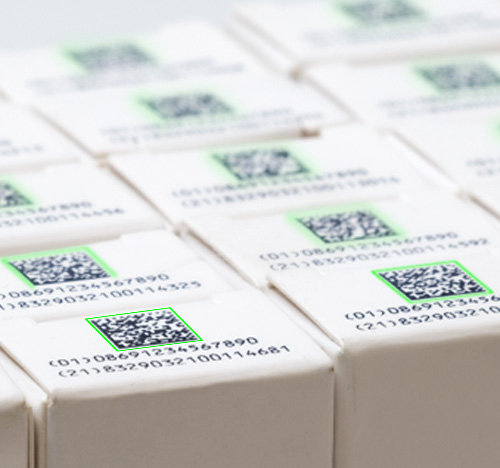 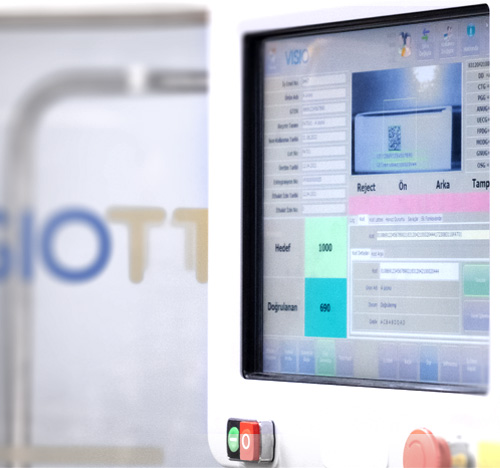